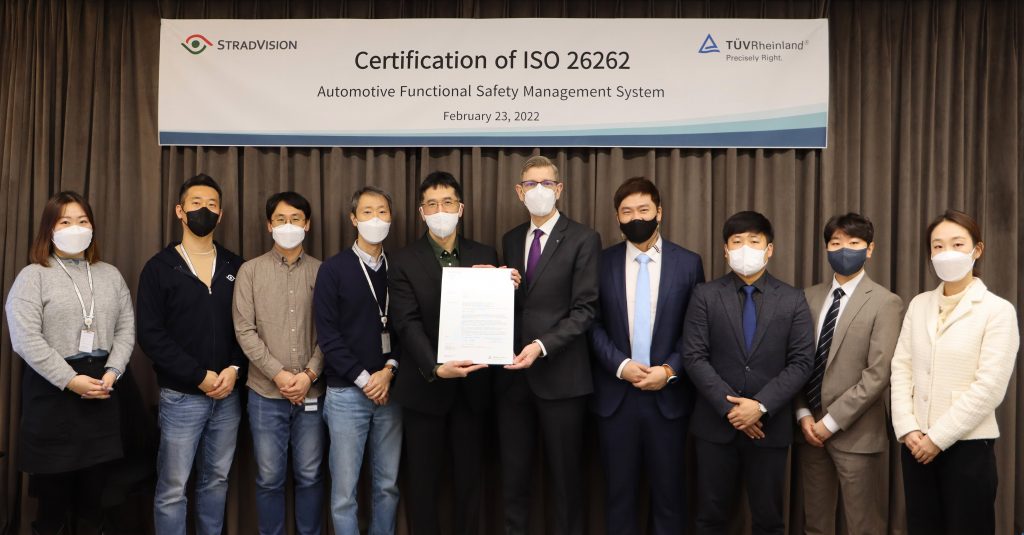 The ISO 26262 certification was established as a global standard by the International Organization for Standardization (ISO) in 2011 to minimize risks from electric or electronic system malfunction in vehicles. StradVision, which recently unveiled its new North American headquarters in Michigan, has been recognized as a software supplier with a high level of functional safety, satisfying automotive customers’ demands by meeting the requirements of ISO 26262 throughout the development and management process of its camera perception software SVNet.

“The automotive industry is transforming into a new business that provides new mobility, transportation, and various experiences in the car as a service, and software is the most powerful driver of this change,” StradVision CEO Junhwan Kim said. “The acquisition of ISO 26262 Functional Safety Management certification demonstrates StradVision’s competence as a global leader in software, a key component of future mobility innovation.”

Currently, the automotive industry is focused on adopting various driver assistance features in vehicles to improve safety and convenience for drivers and pedestrians. As the performance of semiconductors and adoption of diverse sensors in vehicles continues to increase, the importance of safety standards for software, and their level of sophistication, has also risen.

“Stradvision has successfully built its management system that delivers camera perception software meeting the functional safety requirements for automakers and automotive tier-1 suppliers,” said Frank Juettner, CEO of TUV Rheinland Korea. “We are pleased to present ISO 26262 certification for the software that will contribute to enhancing functional safety in the automotive industry.”

StradVision, established in 2014 in South Korea, continues to accelerate the advancement of Autonomous Vehicles. SVNet, its AI-based vision perception software, achieves higher efficiency in memory usage and energy consumption and can be customized and optimized to any system on a chip (SoC).

The software that has been honored with the Gold Award at the 2021 AutoSens Awards for Best-in-Class Software for Perception Systems is currently used in mass production models of ADAS and autonomous driving vehicles that support safety function Levels 2 to 4, and will be deployed in more than 50 vehicle models from 13 OEMs worldwide.