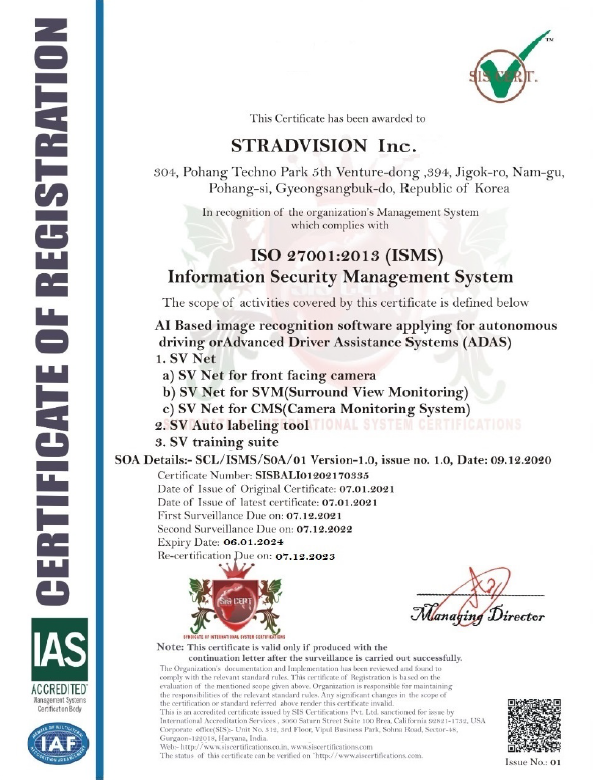 StradVision, a leading innovator in AI-based camera perception software for Advanced Driver Assistance Systems (ADAS) and Autonomous Vehicles, announced that its SVNet software has achieved ISO 27001:2013 certification — a recognition of its proven commitment to the highest level of information security management.

StradVision’s AI-based object recognition software, SVNet, is currently used in mass production models of ADAS and autonomous driving vehicles that support SAE Levels 2 to 4, and will be deployed in more than 8.8 million vehicles worldwide.

“Achieving the ISO 27001:2013 certification is a huge accomplishment and a testament to our endless commitment to the top level of information security,” said Junhwan Kim, CEO of StradVision. “We can proudly say that our customers and partners can be assured that StradVision believes information security is one of the most important values in our operation.”

StradVision is accelerating the advancement of autonomous vehicles through SVNet. Compared to competitors, SVNet achieves much higher efficiency in memory usage and energy consumption, and can be customized and optimized to any system on a chip (SoC), thanks to its patented and cutting-edge Deep Neural Network. The software also works seamlessly with other sensors such as LiDAR and RADAR to achieve surround vision.

StradVision’s latest certification demonstrates its ability to manage the confidentiality and integrity of sensitive data, assets and intellectual property of the company, customers and partners. This proves StradVision’s implementation of a rigorous security program, including development of an Information Security Management System (ISMS) — a comprehensive, systematic approach to ensuring data security that features stringent security controls.