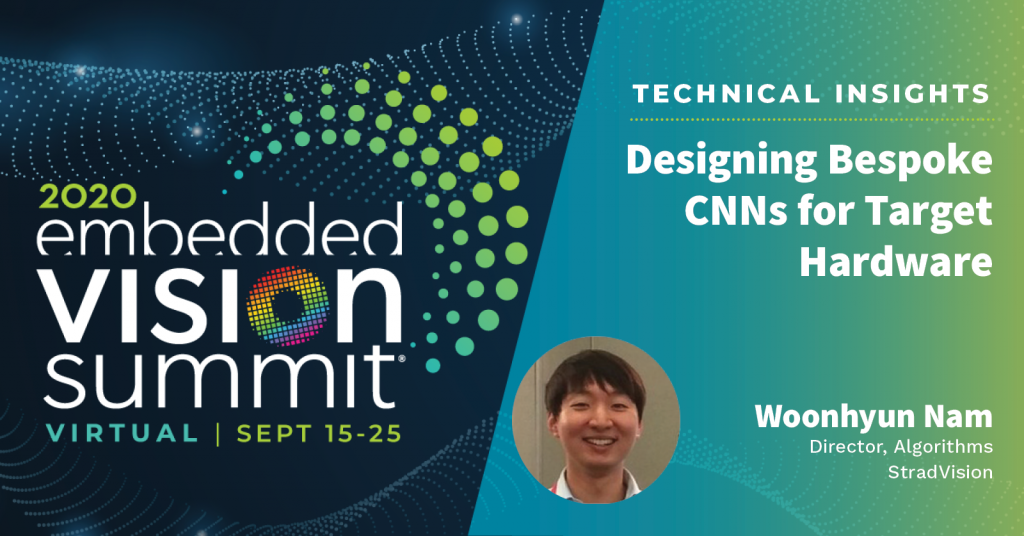 StradVision, whose AI-based camera perception software is a leading innovator in Advanced Driver Assistance Systems (ADAS) and Autonomous Vehicles (AVs), will reveal insights into optimizing Deep Neural Networks (DNNs) for multiple processors at the 2020 Embedded Vision Summit. During the “Designing Bespoke DNNs for Target Hardware” session, which will be held at 9:30am Pacific Time on September 17, R&D Director and Co-founder Woonhyun Nam will also elaborate on StradVision’s patent know-how via its deep learning-based SVNet technology.

The presentation marks the sixth time that StradVision has participated in the pre-eminent conference and expo devoted to practical, deployed computer vision and visual AI.

This year’s conference includes speakers from Google, Intel, Samsung, Qualcomm, and LG Electronics, with a keynote speech from Google’s Distinguished Engineer David Patterson, who is also a professor at the University of California, Berkeley, and the Vice-Chair of the RISC-V Foundation.

During his session, Nam will touch on StradVision’s established patents, including their patented DNN-enabled SVNet software, as well as discuss the challenges and opportunities of Deep Neural Networks, including cost-effective techniques to optimize DNNs to better fit different processors while also reducing model size and power consumption. The effort required to transform the DNN for each processor can be prohibitive for DNN developers, and Nam will explain how quantization and structured sparsification techniques can help by reducing model size and computation significantly.

A Ph.D. holder of Pohang University of Science and Technology’s Computer Vision Lab, Nam will draw from his experience as the head of the algorithm engineering team at StradVision, whose pioneering SVNet software can quickly and accurately identify potentially hazardous objects and road conditions for ADAS assisted and autonomous vehicles, such as other vehicles, lanes, pedestrians, animals, free space, traffic signs, and lights, even in harsh weather conditions or poor lighting.

SVNet relies on deep learning-based embedded perception algorithms, which compared with its competitors is more compact and requires dramatically less memory and electricity to run. It supports more than 14 hardware platforms thanks to StradVision’s patented and cutting-edge DNN-enabled software.

Attendees will also learn about StradVision’s experience in bringing AI-based camera perception software to the mass market through international collaboration as well as the view from Asia on the future of the ADAS and AV market.

Since 2012, the Embedded Vision Summit has been organized each May in California by Edge AI and Vision Alliance, an industry partnership operated by Berkeley Design Technology, Inc. Participants regularly include industry experts, business leaders, leading academics, investors, and entrepreneurs interested in visual AI.

Due to global health concerns, the 2020 Embedded Vision Summit will be held online from September 15 to 25.